The action begins at the end of 2018. We go with Michał for a beer, he suggests: come to Mont Blanc, we will go downhill. I have concerns but I say: let's go. 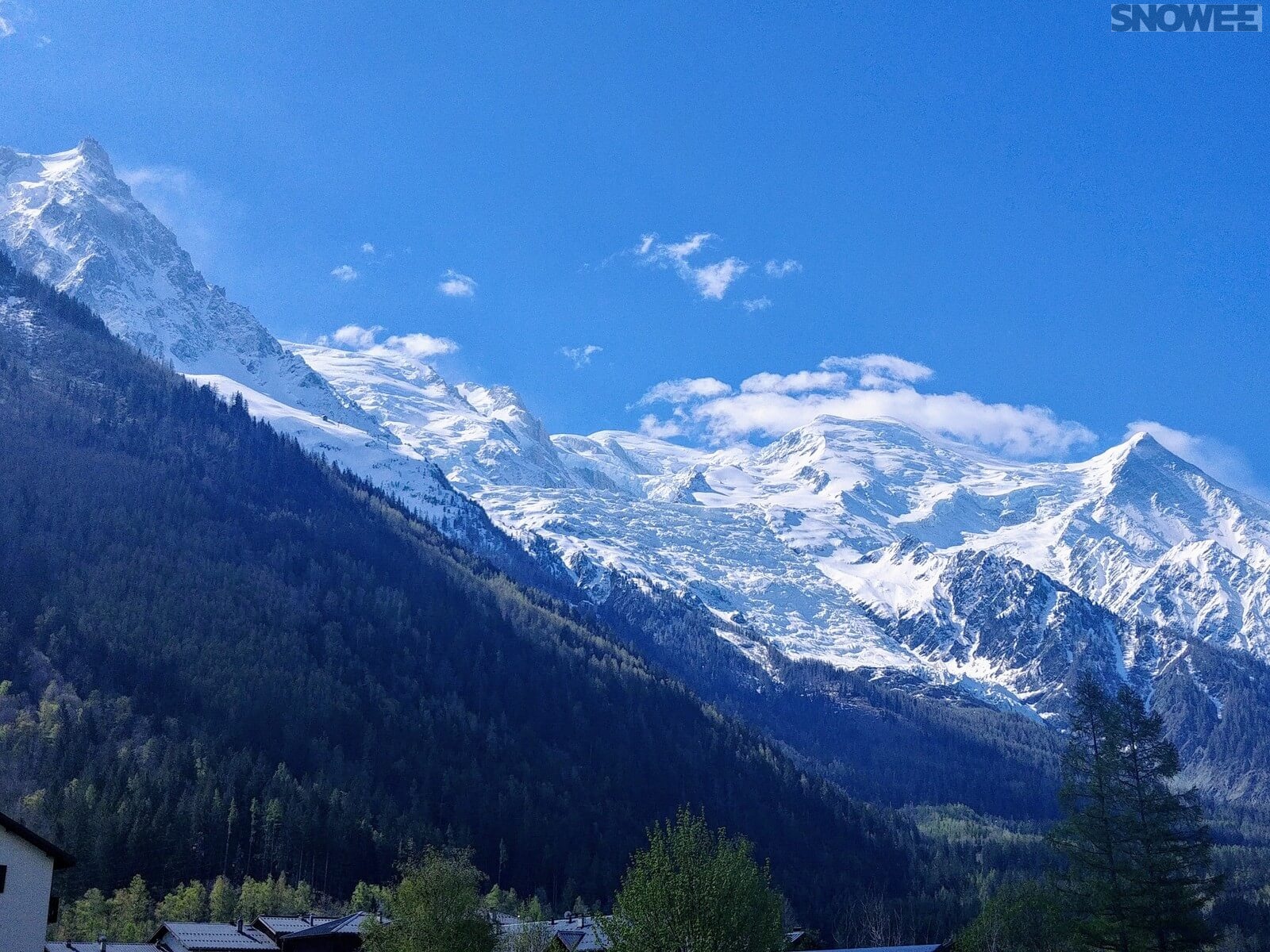 I know this is a relatively "easy" mountain. I know my level of skateboarding and I was pretty sure about that. Worse with climbing. I have very little experience.

We knew that the winter season in the Alps and a lot of work were waiting for us. Therefore, we set the date of the trip at the end of the season. It was supposed to be the end of April, then the beginning of May, but then the weather broke down - due to the heavy snowfall, the avalanche risk was too great.

So we were waiting for the weather window, watching the forecasts. It gave us an idea of what is happening in Chamonix, but we also know what it is like with weather forecasts in the mountains. This works best at 1-2 days ahead.

I devoted this time to completing the climbing equipment. I borrowed a harness, carabiners, coffee machines and ropes from Olek; sleeping bag, crayfish and mattress from Tomek and pants from Bronek (I am always warm, so I prefer it without boarding on every day & #8230;) - thanks, gentlemen! Of course, the help of our travel companions, Michał and Doris, was also invaluable. They took all other important gadgets with them.

We finally left for Chamonix on Friday, May 10. The route passed without major problems, so in the morning we were there. We knew that it was supposed to clear up only on Sunday, but the unpleasant aura upon arrival jerked our morale.

Instead, we had all Saturday to do the formalities. We asked about the prices of guides (although we were rather focused on the fact that we go without, in the footsteps), we realized what the local weather forecast is, we found a rental of splitboards and took over the night. 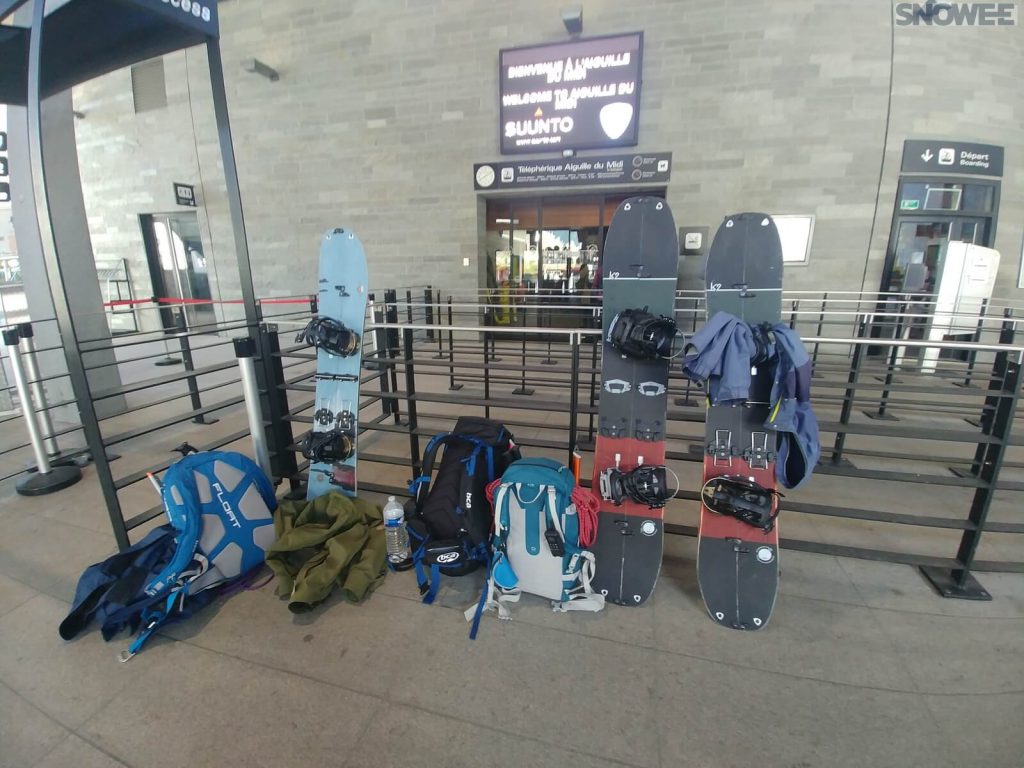 On Sunday the weather was a bit better, but it started to blow strongly. In the morning the gondola was closed due to the wind. We watched the weather and checked the queue status every hour. Around noon, we finally managed to reach the upper station, located on the summit of Aiguille du midi (3,842 m). We spent the whole day there to acclimatize to the appropriate height.

We analyzed the route ahead and we came around the queue station to stimulate our bodies to acclimatize faster. We returned to Chamonix to calmly pack for the final trip. We checked the forecast for graduations - sunny, but very windy & #8230;

On Monday morning, a full lamp greeted us. We did a brief review of the equipment and made sure that we certainly packed everything we needed for the next 2/3 days into backpacks. We took the cable car to Aiguille du midi, plugged in the boards and prepared the equipment. We pulled down a bit towards Mont Blanc du Tacul, and then walked a few hundred meters towards the Cosmique. We estimated that it was possible to slide down from the very top of the lobby, but finally we adopted a much safer version and left about 50 meters on the ropes.

We rolled up the climbing equipment and descended on boards to a height of about 2,250 m above sea level. There we prepared our splits and started a longer climb to the Grands Mulets shelter. Along the way, a few hundred meters from us, a huge block of ice detached from the glacier and caused the largest avalanche I have seen in my life.

We arrived at the hostel around 6pm. It was relatively late. We prepared some water for the next day, ate "lyophiles" and around 20 went to sleep. In quotation marks, because in fact most people in the shelter watched rather than slept.

We got up around two o'clock, but we walked a bit, so we finally left the hostel after four. Behind us was only a group of Italians who quickly overtook us - they had a better pace on ski-tours. The whole climb on the splits from Grand Mulets 3 051 m above sea level to a height of about 4000 m above sea level proceeded in a good atmosphere and full sun. For most of the route we were sheltered from the wind and the temperature felt not below 10 ° C. However, as soon as we went out into the open air, the wind reached over 100 km / h. Last 300 meters of elevation took us about 2 hours. We arrived at the Vallot shelter (4362 m above sea level) around 11 o'clock. 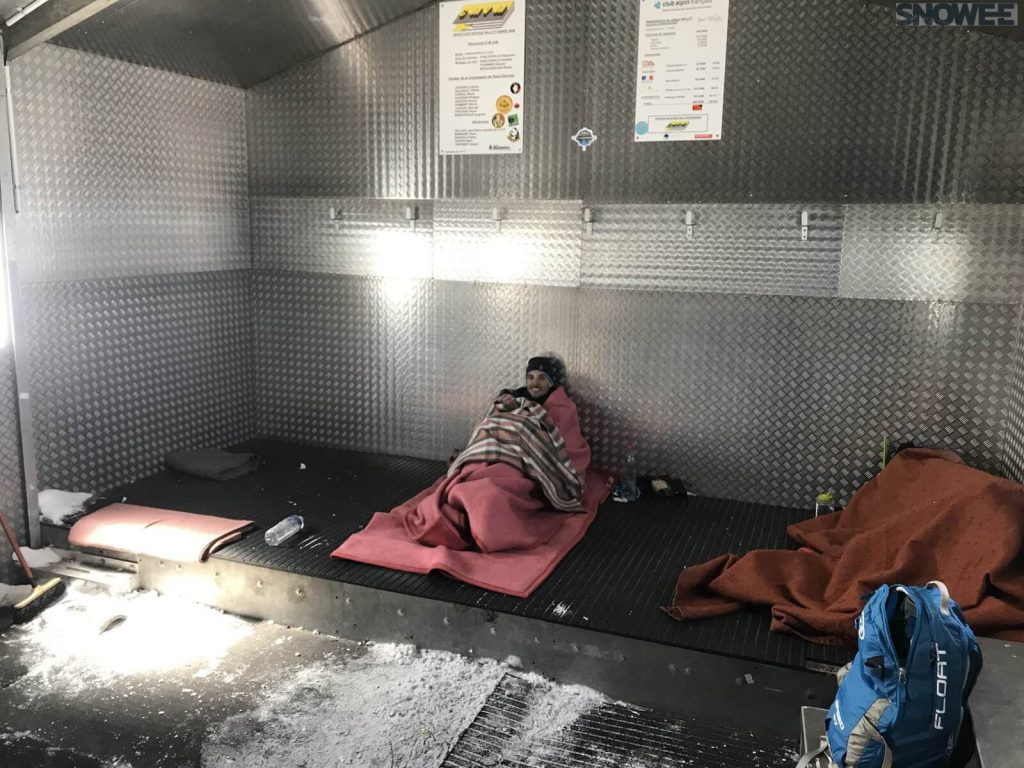 We were freezing, so we decided to rest in a shelter. In the meantime, it turned out that most people gave up the summit because of the wind. The wind was strong enough that it was difficult to stand on splits or legs even when using crayfish. After about two hours spent in the shelter, we decided to go down the boards to Chamonix.

Thanks to the Englishmen we met along the way, we were able to go down to the very end of the snow cover, i.e. to an altitude of about 1,400 m above sea level. It's almost 3,000 m leveling and the longest downhill ride I've ever had (and the team probably also). Next we had to go down to Chamonix (1035 m), which took us another two hours.

Insufficiency? Sure. To the summit, which would be the crowning of the whole trip, we lacked a little over 400 m. We know that in these conditions downhill would not be possible, but ... If you leave the mountains, there is always some but.